First off before any gamedev talk let's just get out of the way that the Alliance is totally going to win the Battle for Azeroth (new WoW expansion just announced at BlizzCon). You can tell I am totally not biased based on this flag. 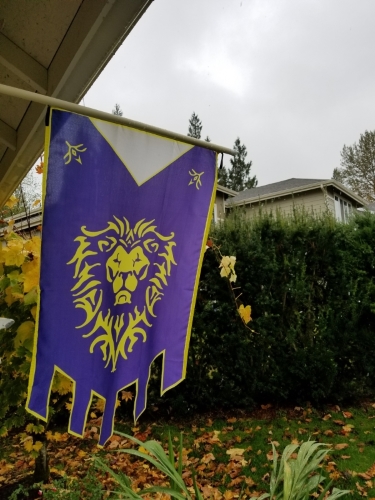 Another week another 49 lectures down in the class with 32 left to go. Already excited thinking about the final course after this one (art course) and showing you all how bad a programmer can be at art~

This image just shows how much of a mistake game development is. I shouldn't have this sort of power, to harass my characters with this nonsense. It's like the sims but without limits.

Started using ReSharper-Unity this week which is a Unity plugin, for the ReSharper plugin, for Visual Studio. Nested plugins! In seriousness though this is a really cool plugin that teaches ReSharper how the Unity API works so that it can give you more intelligent suggestions and refactors. It even marks Unity specific stuff such as engine callbacks with a special icon and gives you a blurb about how it is used.

We started rethinking the UI this week and made it more "Diablo" like. I was expecting to have to do something like have a mask that would move over the image to give the effect of health disappearing but it turns out it's such a common need that Unity already has these sorts of image fill effects built in.

By playing around a little more in particles some fun effects are possible, the noise function when tweaked can provide some really organic looking movements. Here is an example on how you could give the effect of faerie woods with it.

It's Sunday morning as I put the finishing touches on this having missed the Saturday blogging day due to all the BlizzCon madness the last two days, time to get this out and dive back into game dev rather than just drooling over Blizzard's games~