A few days late on this post but better late than never. This week was mostly about updating the various user interfaces to work with the 3d rebuilt version of the game. At the same time I optimized a number of systems to cut down on allocations after startup and other scripts that scanned for objects too often. I also added a mile run to my workout routine a few times a week so that's been a nice shake up.

Here we have the shield, hull, and targetting indicators back online as well as swapping between tactical view and a closer view. If there are no enemy battleships around, a battleship will turn it's guns on enemy fighters. You'll want to be fast, or come with backup. Navigating between star systems hasn't been fully re-implemented yet but jumping into a system is in and has a new effect. I dropped the vortex look of the 2d version of the game and opted for a light flash. And finally cycling through the previously implemented interfaces that are now fixed up for the new version of the game.

In the next week I plan on finishing up travel between star systems and then working on attack runs for fighters against battleships. In the previous version of the game fighters would just move to the battleship layer, but now that we're going 3d I'm going back to the original more ambitious design. 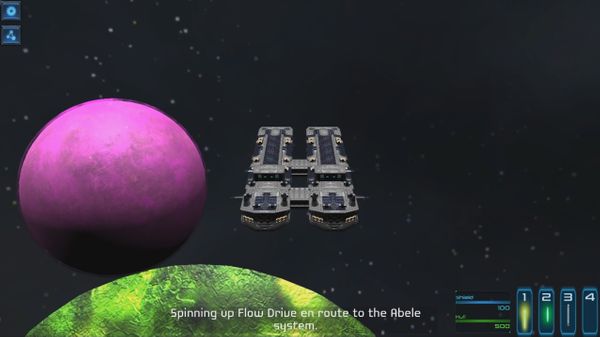 A bit of a short week considering last week's blog post was Monday, but onwards and ever upwards we must go~ 🚀 Just about every system that was in the old

Salutations dear readers~! We're back again with the project to get the 3d version of Star Cinders up to where the 2d version was and then forge ahead 🐱📣 I estimated